Having spent my virgin year at Burning Man in 2009, I went as a blank slate. Although I had almost a year in the Burner culture in Vegas, experiencing the people there was almost culture shock. In my personal burner blog, I wrote a trip report detailing a lot of observations. I noted there was a lot of differences in the area of how women were treated and sexual identity.

While attending, I observed and watched as many people as possible. In spite of the “radical inclusion” principle in Burning Man and “radical self-expression” I found many straight men deeply insecure in their own sexuality. Incidentally, there was a lot of objectifying of women by men or by themselves in order to get attention.

The costumes and the unleashed behavior of the heterosexuals and repressed majority of the default world represented in the sex, drugs, and the party-hearty were the things WE queers already went through in the 70’s in mass; what many gay youth do to rebel already. We have lived this.

I found the queers of Burning Man living closer to a default comfortable existence while the heteros acted out under the guise of being “creative” while being simply ridiculous.

Am I being too hard in my assertion? Is it fair? What matters is that the arch-type has shifted. I see gay people comfortable with their identities, selves, image while the heterosexuals are scrambling in insecurities with identity and sexuality.

This was a blanket analysis while not defining all heterosexual men. There were some major differences in the men I met out there and the expression of who they were. Preconceived notions were turned upside-down.

Not to get lost in what this article is about… it is focusing on the male sexuality of Burning Man reflecting the Gay Male. While the feminine spirit is strong and a force in Burning Man that is formidable, my perception is that it was lost in the glare of the overwhelming amount of women objectifying themselves.

Through all this interaction, the gay people blurred into the background almost as the heterosexual couples blur into the background of the default world. They were not trying to make a statement with regards to their orientation or sexuality while the counterparts were screaming it from the trees (not literally).

When two young men walked through center camp holding hands I just watched them for a little while and was touched by their comfort in their world, with each other, as a unit. Meanwhile, a naked man walked by with four or five fake penises next to his own; all of them looking real and really confusing onlookers. An older man strolled through with brightly colored latex chaps and a g-string barley concealed under a thin layer of tutu.

Gays in the Burner World… well this whole thing came from San Francisco 25 or so years ago. Though I only met one of the founders of that age, I see in this a distinctly heterosexual white male celebration of self exploration. The gays did that, doing that on another vibration, but left feeling like the ones looking back waiting for them to catch up. Them.

In the above video, Gay Icon “Halcyon” appears in the interview. He as a whole series of often Burner related video on YouTube; Hug Nation. There are so many amazing videos on YouTube exploring the Burner experience.

The Burnal Equinox happened at the beginning of March, which for all accounts was hump day for us all. As we go into May, people are divinding up for their camps and busily making preparations. Where are you camping this year? Read more…

I am looking for more camping information. Need more camp 411, please share. Soon Burning Man will be releasing the names and themes of the approved camps and we will be there to list all the queer ones.

Toaster notes: This was a sculpture in front of Comfort and Joy last year. It was awesome because I arrived late into the night (early moring) and came across a young cross-dresser trippin on something laying under it. It was just fun.

Larry Harvey made an appearance in Las Vegas at the monthly First Friday art festival. It was a distinct pleasure having met him. Every month on the fist Friday of that month Las Vegas comes alive in their huge Arts District. It’s so huge many people have no idea it exists. AND it is permeated with Burners! -shocking!!!

Your admin is a member of the Las Vegas Burner community and has been for a year and a half. I assume it is as warm and special as your own community. Feel free to post an article and share!

I have increased access for all current members and it will be done on a case by case basis for the future. This means you can create posts and blogs and what-not; as some might say.

If thee is something you want to add or contribute and are having problems let me know via the online form. Or reach me anyway you know how.

Please add your comments below about what your plans are for Burning Man this year. Share…

Welcome all new members and members transferring from the mother site. Yes, this version has a lot more abilities. I will continue to add features because this software is a lot more expandable. Awesome…

I know there were tons of Burner resources out there. There are few for gays(Queers). I am linking some to their Camps; liked Comfort & Joy. Shannon added Camp Beaverton … love them. Moonbow is out there… I heard about something caller Stellar(?) but have never seen it.

On tribe.net is another gay burner tribe. All worht chaecking out. Hopefully this is going to be the most interactive source available.

ePlaya is also a good source, on BurningMan.Com. But there are so many pontificators on there any reasonable and honest communications can get lost. If not for a few reasonable moderators on there you might just lose your mind.

Open to suggestions too. Use the contact form in the Help page to shoot me a note. Or post on my profile. XO!

Is Adam the new Madonna? Well, after Lady GA GA of course. I found this shot of Adam at Burning Man and wanted to share it with you all. 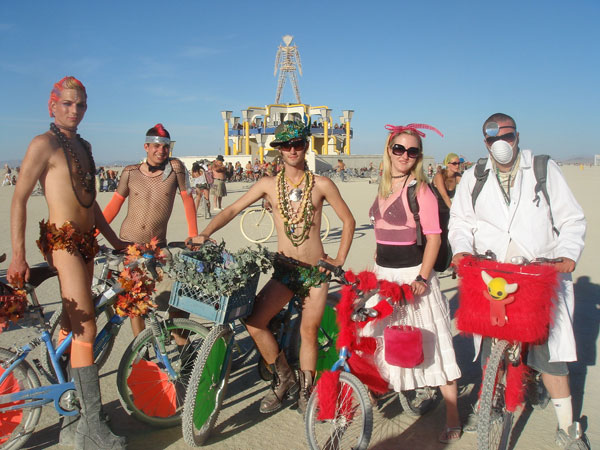 As of today, I am processing a whole new revision of the site. The previous software I used for the site had some security problems. This one shold work better.

I appreciate your patience and for those of you who transferred over and joined the site once again. Hopefully you will see the improvements and the versatility of this site.