It had occurred to me that there is at times a lack of balance with some of the things we involve ourselves within the community (Burner community). As a blogger here on this site and others I have been very critical of BMorg on those occasions; they do make it so very easy. I will explain this a little more later.

Balance is a key to life in many areas of our existence and finding it ideally brings harmony. At least that is what some spiritual good feeling stuff tells us. While we can be critical of BMorg and it’s operators true analysis comes in examining the whole picture.

The Scales of Thought

The ticket fiasco in 2012 is one of the best examples of finding balance in a difficult situation that hit the community and affected all of us. As most know, the ticket lottery in 2012 was a solid brown poo on the heads of many of us who have been engaged in the community. Many seasoned burners were so pissed off from it they walked away and never looked back. While these extreme reactions are not un-typical here is something as an example:

Albeit extremely simplistic in its context you kinda get the idea with the handy +’s and -‘s, right?

Balance comes in other areas too, which we recently explored in another article where this author reflected within the Queer Burner community. Camp leadership needs to be present and have their heads in the game, especially when they have multiple souls under their roof. Much of Comfort & Joy has learned to master this balance and will hopefully be sharing that wisdom at the 2014 Queer Burner Leadership Summit.

The community and the leadership are always up to whatever challenge is laid at their feet. Recently in Burners.Me an argument was made about the long existing Burner Man Project leadership stepping down. While rolling into a non-profit was a solution for protecting the cohesion and brand of Burning Man with a clever legal structure with the facade of bringing more to the community what has it really done?

So who is under fire more? BMorg leadership or the community? While the house of the BMorg is made of glass the villagers are too stoned to really grasp the complexity of this relationship. Balance often comes late from the people held so highly and balance gets mired down in the expectations of the people who consider themselves devotees to the cause.

Many members of the community demand a drama free zone without concern or focus on the leaders of this community. Being held to the light of the flames the people driving Burning Man bear the cross when the gray lines of the 10 principles are being applied ___ like they were scripture.

Let’s go back in time to “Green Man” in 2007 where for the first and last time ever the people who brought you Burning Man allowed sandwiches to be sold at center camp and ‘green vendors’ showing their wares. The 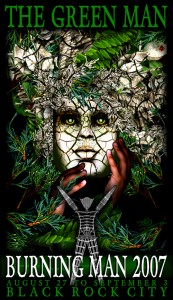 ramifications of allowing these elements into an event that talked about Decommodification was loud. But, who can fault the organizers for trying something new?

Selling coffee was new once, but these days no one could imagine center camp not having coffee or the amazing people selling it.

Going back one last time to the 2012 Ticket Fiasco the leadership recovered very well in the end, but their proximity to the issue seems to have clouded their ability to revel in their success. The SPARK movie was an unnecessary revisit to that mess, but a win with giving me a visit to the playa while in the default world; see it’s all about balance.

2012 made a lot of people fall off the fence with the obscene growth of the attendance at TTITD. For reasons of their own, the days of HELLCO and FrogBat (in their glory days) are gone, and some people have moved on in their journey.

Has Burning Man jumped the shark with the numbers swelling? Who is still adding Burning Man to their bucket lists? And… are the people who made it what it is still going?

Look, we’re all basically insane for doing this year after year. Anyone we know outside of the community thinks we’re out there fornicating endlessly and tripping out on drugs anyway. This ki-ki is cra-cra… (yeah, I thought that right after typing it too…. I already regret not editing it out).

Can we be critical of the BMorg without destroying the people that make this elaborate event happen every year? We are the people who pay for the ticket and they are the engineers who make fantasy land reality.

As long as we keep going things will continue to evolve and whether we choose to believe it or not, I think the BMorg Board is willing to meet us along the way. Keeping the community happy is in their benefit, so we think, but to keep this going we cannot be afraid of change.

As mentioned above, Burning Man leadership has made it incredibly easy to take a pie in the face when it comes to criticism. Over the many years some decisions were made and their presentation was so mired in arrogance that it was dumbfounding. Arrogance? Maybe ignorance is the better example, because this nest of heterosexual white hippies are so busy defending their ideology that they often forget the emotional and fiscal needs of the people who have pledged loyalty.

One of the latest controversies was Rape Kits on the playa. At the 2012 Burning Man Regional Conference and Leadership Summit in San Francisco I brought some very real issues to the table in a forum attended by community leaders, board members and Regional Contacts from around the world. Because of the projected (at the time) 70% of expected attendees who were unfamiliar with our 10 Principals we were concerned for people vulnerable to physical attack including women and fae queers.

While we have the Gayborhood where ANYONE can find safety (a promise made by Queer Camp leaders at the 2012 Queer Burner Leadership Summit) we were worried that given the expanse of the attendees was not being matched to assure education and safety of people in attendance; particularly women and fae.

Andie Grace (aka Action Girl, formerly with the communications team with Burning Man) very confrontationally stated in the public forum said that people were responsible for their own safety. Well, that year sexual assaults were on the rise AND there was a very publicized rape behind the Emerald City just off the Esplanade. There were others too and Burning Man was moot.

However, it appears that in 2013 Rape Kits did make it to the playa but how they were implemented is not clear. The fact is that a Rape Kit is a very complicated thing to implement and the balance is that Burning Man simply cannot have a hand in it. But, an official agency can.

While the short sighted reactions to things much like Angie Grace’s comments make the leadership look very dull in their ability to respond to their community.

Tearing Down the Man

There are not shortage of critics. There is also no shortage of people with glitter in their eyes when it comes to how we see Burning Man leadership at the BMorg. It is so easy to find holes in the thinking, but this event and this community is really doing a lot of very positive things. The hypocrisy of BMorg is second to the results. And, the future of  Burning Man itself is unclear.

In an article that came out today (update 1/6/15: the following url ceased to exist and was unlinked: http://www.groundedmedianetwork.com/fuck-burning-man/) the above video was attached. You can see here where there is a lot of holes in thinking and what this is all about, but maybe this is being take too seriously?

When we criticize are we looking at destroying Burning Man? Are we demanding they see reality from our perspective? Do we not give them the gay area to make mistakes and come back with a solution? Do we consider balance? While almost everyone who has gone says that this has changed their lives or made an impact that in itself is the big win.

This pre-season rhetoric has seen so much criticism lest we forget the gift of evolution. Yes, the environmental impact of the event might be questionable. The motivation of the BMorg might be questionable. We can find holes in anything, but if Burning Man were to throw their hands in the air and say “fuck it, we’re fucking done” we would all feel the world got a little more darker that day.

Let’s face it. The BMorg has made some stupid decisions. So have we as individuals. Yes, ticket prices are obscene and becoming more and more out of reach for the average person. The cost of going is less for the accessible for the average person and more so for the privileged. YET, many of us without much cash still manage to get out there (myself included).

Balance is the key. Knowing the difference between attacking windmills versus standing up for a real issue impacting the community is key, too. Right now we have Regional Contacts (R.C.) (except for San Francsico) who represent BMorg to their regional communities and R.C.’s who have a voice back to Burning Man. Hold your Regional to the fire, because he or she is like your state senator for Burning Man.

TTITD –  That Thing In The Desert aka Burning Man

Fertility 2.0 is now at an end and a new year begins marching toward August 25th, 2013 with a yet to be themed event (to be announced this Fall according to the JRS). Last time Larry had to take some time to name the theme he came up with this unimaginable Fertility thing. Five or six years before this the theme was announced after the man burned through BMIR radio.

For some of us, myself included, September always was the beginning of a new chapter. Maybe it was because when I was a kid typically the new school year started? Effectively, there has been a succession of changes that happen to me and the world about this time of the year and though it really has nothing to do with Burning Man specifically it is a nice punctuation culminating with the temple burn.

All members are encouraged to share their stories and experiences. The trip report will be published here soon, so look forward to some of those exciting details.