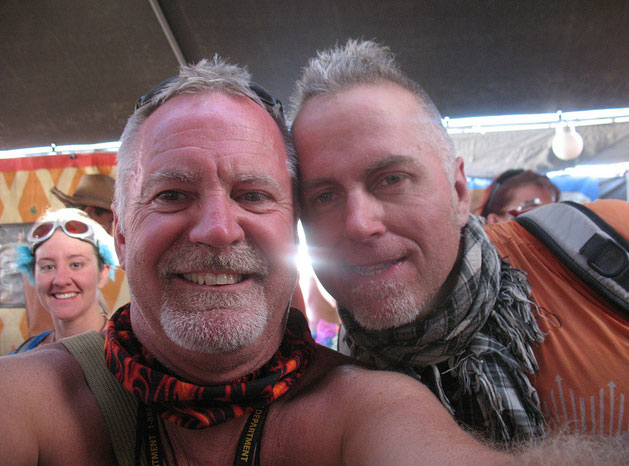 One of the best pieces of advice I got when in the first half of this project came from Kitten was that the posts and so forth from this site were not written in “I” statements. This project is not about me. It is about a community of people inside a community in side… etc. Why is this project to important to me and what am I asking people to do with it? This is more of an “I” entry…

My name is Scott. On playa I am known as Toaster. I am a queer male who loves people of all genders and joined the Burning Man community to grow and I did. One of my early specific goals was to improve my relationship with women. I since then learned to accept and relate to people of all gender identities and am so blessed for it.

When I became involved with my first Burning Man collective it was the Las Vegas Burning Man group. I arrived on a beach on Lake Meade one night and met Debbie and Mike; older wild ass couple you would fall in love with immediately. The Vegas community was in a huge transition at the 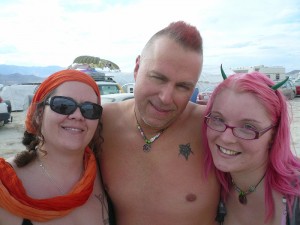 time with identity and base. I quickly became deeply involved and at some point along the way was being considered for a Regional Contact (R.C.) role.

At the time Cameron Grant was the core R.C. and his girlfriend Melissa were real heroes in keeping the community on track. Captain Bill and his wife Amber were also strong leaders in the community and I did great things will all of them.

It became clear after my first year to Burning Man in 2009 that there was a huge presence of LGBTQ++ people. The Gayborhood was established and Comfort & Joy was the jewel of the crown. There was the last ember of “Stiffy Lube” in the shadow (history). I met a shining star under the mylar rain out front… and I wondered how could it be possible to make this amazing feeling last.

While queer burners had their own camps, clicks and factions there was no single unifying presence that understood LGBTQ++ needs. And, there was something clearly missing from the burner culture at large. There was direct and indirect homophobia. Not to mention on the onslaught of trolls on message boards; ePlaya etc….

This project is designed to provide safe space for people to network from. This is the space to get camp information and general information from the community within and without the LGBTQ part of it.

It started off as Gay Burners [dot] Com. An accident by a member who called it Queer Burners got me wondering… “who is looking at this site and who is the audience?” After all, this is for every person regardless of gender of orientation with a focus on the LGBTQ++ population.

It is about a place for community. While Burning Man [dot] Com is the premiere source for all things Burning Man there is a bevvy of sites out there for the pockets of communities out there. This is just another one. This speaks to the fastest growing segment of the Burning Man demographic.

Burning Man is not a gay event and many LGBTQ people who attend never go near the Gayborhood. But, the Gayborhood is so vital and important as an entity. Why? If you cannot see that now it simply cannot be explained any more than explaining Burning Man to normal people.

I hope with all my heart that people see the value in this project and embrace it. We have groups to make us feel safe. Many of us queers have CHOSEN our families and made new and unconventional ones. We have our queer neighborhoods at home cities. We have groups of friends. We have so much and asking you to see the pride and community that blooms from queer burners inspires passion and more. It’s about community. It’s about a pocket of light that wants to shine back on all of you.

As many of us prepare to leave for the Playa in a few days, I wanted to bring up a subject that I feel very strongly about —- caring for our community in our big tent (and our camp in general).

We are not anybody’s mothers, but we need to keep in mind that for some of our guests our big tent is a completely new (and hopefully magical) experience. They may NOT be ready/able to fully practice self-care, and may need us to look out for them.

If you see anybody who looks out of it, lost, or freaked out, it is always good to politely ask “are you OK?, “Do you need some water?”, or “Can I help?”. If needed, find out if they are here with friends and get them. If you need to wake somebody up because you think they may be out of it, then do it. If you feel someone needs medical attention, then insist on it. Someone passing out is a medical problem and should be handled (with love and without judgement).

Part of the magic of C&J is our sex-positive energy. This can be abused (especially against people experiencing it for the first time). Excess alcohol/etc can cause people to lose the ability to provide consent. This loss of consent can result in unwanted sexual advances or non-consensual unsafe sex. If something doesn’t look right, you are empowered to step in and investigate. If you feel that someone is out of it and unable to consent then end it. You may make someone unhappy or cause a scene, but this is our camp and we need to care for our guests. If you can’t do this, then find another camp member who can.

I’d love to hear any discussion from others of how to best keep ourselves and our guests safe while we are in Comfort & Joy.

This year I will once again be bringing my camera to the Playa. This is meant to be my gift to the camp, and I also want to respect everyone’s privacy. Here is how I approach my photography:
Please let me know if you have any questions or concerns.
Dot/Tom

Comfort & Joy’s first year that you can read about here). He’s volunteered at Touch (for me directly, he was great with some surprise errands, very constructive/low-drama, independent do-er, etc.)

Now Tim lives in Wisconsin but is driving to Reno a week prior to construction to visit friends. He’ll meet the Comfort & Joy Opening Crew on Monday & werque the full construction week (IF we can get him an Early Arrival pass from one of our sister camps that had to cancel, which I’m 70% sure will happen). Tim is a trained former chef & bringing 400 pds of food so I’m hoping he can connect with Mona about integrating this into our supplies. I also encouraged him to prepare his tray offerings when his faerie senses tingle as Guest Services tra in the main tent.
Tim Bates on Facebook: https://www.facebook.com/tim.bates.370

Camps are recruiting and welcoming new members of their micro-communities. We are 90 days out from the burn people and you need to invest yourself, your time, and in some cases your dollars to camp with the right space for you.

Today, Gender Blender added their web site to their listing and an email received from PnkPants said they were looking for some amazing cool, new people. Check them out on the Queer Camp Page.

Also check out the pages listed in our previous post and the Groups page for more info.

BusCamp is made up lotsa folk including many veteran Burners who can make the trip every year. I soon met up with Bill and Merileu – a couple from Oregon that I met on my 2007 BurningMan Trip. They went out of their way both this year and 2007 to welcome me and it was very nice to see them again. I also caught up with Gary – who is the Bus Camp commissioner and always leads the yearly organization of the camp. BusCamp was already pretty well laid out by the first day and included a central area with a small bar lounge and a place to host BusZilla – a VW art car that was constructed by Bus Camper Heather and a dedicated crew of folks.

Along the beginning of the week – I got to meet more of the Buscamp folk as they arrived as well as more veterans that I managed to miss in 2007. A buscamp couple Paige and Kurt were married on Tuesday evening at BurningMan and the wedding party all rode in Walter – the world’s largest VW bus. Walter was HOT ! 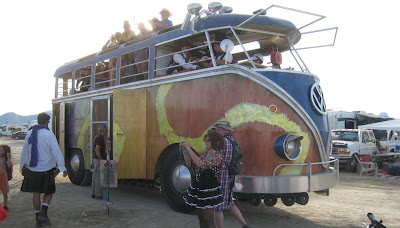 It was a beautiful night for a wedding and there was a fantastic sunset i tried to catch.

During the week I brought out the Dutch oven a couple of mornings to share with campmates. It was always interesting to get up in the morning to make cobbler and see BusCamp quietly asleep.

Several ( many?) folk at VW BusCamp have involved with “Hooping” – which as it implies – involves Hula Hoops. I really did not know much about Hooping – but I have a new respect for it now and what a great work out and dexterity activity it can be.

Of course – an evening of watching folks use Hula Hoops that were on fire – certainly added to visual fascination.

I managed to catch a lot of great pics with the new Ricoh on long exposure.

Later that week – Joel, Ramona, Matt and I had some more fun with the camera and some glow sticks

Other activities at BusCamp during the week included a Tye-Dye workshop hosted by Annie and Silkscreening with Joel and Heather. All fun and really brought out the folks at camp and beyond. Later in the week – the camp hosted a Red party potluck as well.

A great camp and group of folks to hang with at Burning Man and the constant VW tech talk is all FREE!