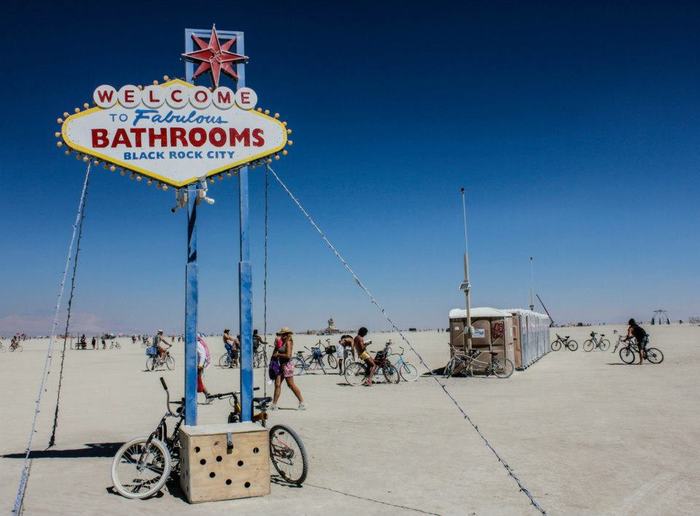 For all the silly things in this world there is nothing more ridiculous than the winds at 50 mph blowing dust non-stop so bad one cannot see 3 feet ahead of oneself. Or maybe that there is the same art car passing by fifty times and the people on it never let you on? Or maybe waiting to get in the gate when you can see the brightly lit gate area 12 cars away and YET it is still 3 hours from getting inside.

Insanity. (Did we see that out there somewhere in the form of art?)

So, we pass you a magic wand and now you have 2 choices to make a change on the playa right this moment. If you play the game right you will be whisked back in time and given a chance to relive Carnival of Mirrors with your changes implemented.

rules: 1. complete the survey as requested. 2. see the results as they compare to others who have also participated. 3. put on your favorite burning man costume. 4. this includes makeup and personal lighting. 5. proceed to your front yard/sidewalk/dirt-patch and light a small fire using anything flammable BUT cannot be larger that a very small flame. 6. dance around it while spinning siting the 10 principles in order and after 3 times… you will find yourself in deep playa. The consumption of alcohol or absinthe before answering the survey is a recommended start with a 2 oz shot with each step. 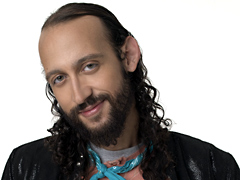 Seeing Queer Burners (meaning the population/membership not the web site) in the media these days has become a common thing. In 2013 we saw 2 movies, tons of art and more. Biggest items out there was Meet the GlamCocks and Meet the Beavers that were both seen at Film Festivals all over the world featuring camps by the same names. 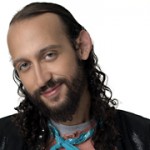 The web site on logotv.com features the usual stunning goddesses includes the gorgeous Courtney Act (@courtneyact) who has in the past camped with GlamCocks at Burning Man and appears in their movie. 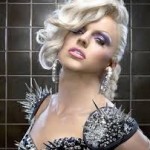 It’s not clear if she was there in 2013 when RuPaul Drag Race and judge on the show Santino Rice made his maiden trip to TTITD. Santino seems to have loved his journey to the flames as noted on his Twitter page (@santinorice).

Do these two have a past together and is it something he would need to recuse himself for this coming season? In just a couple days we are set to find out.

It is exciting to know Santino has set himself to come back for 2014 and maybe he will come and party with in the Gayborhood. Meanwhile. in just a couple days.

There are no shortage of famous people at Burning Man every year. Some have been very open about their participation.

So many more…. that was just to name a few. Yet, we respect their journey and in the BRC they are just another citizen of the city…

(Note: I did reach out to Courtney and Santino hoping to talk to them and expand on this story more, but with the upcoming show I am sure they were very busy. We wish them the best in the coming year and look forward to their success.) 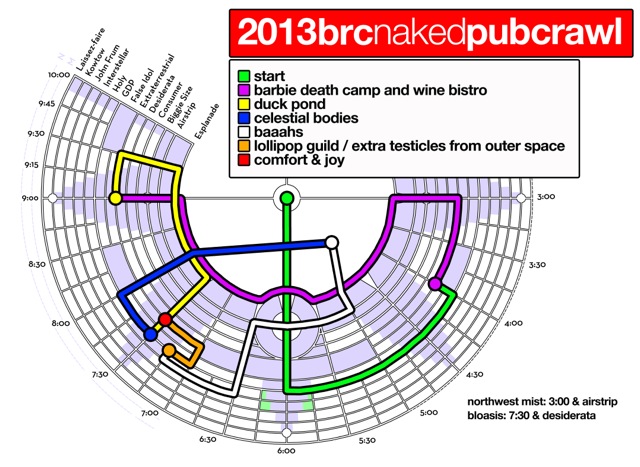 The ride starts at the Man at 11:00 AM on Wednesday.
The event is listed here: http://playaevents.burningman.com/2013/playa_event/9468/
The website is http://www.dragondebris.com/brc_pubcrawl.htm (DEFINITELY NSFW)

Seems like a lot of people are energized and motivated for 2013 by their experience in 2012. Who would have known that people would have been encouraged with all the misgivings that came out of 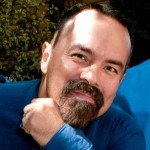 the ticket fiasco to get to renewed energy about Burning Man and its culture.

This year the Gay Pride Parade and the Official Meet & Greet were held in honor of one of our burners that passed on. Although many friends have gone, this man named Mario Cisneros was an active leader and participant in the Queer burner community as well as his region. That means he was active in the general community with Burners in Los Angeles where he was from.

Enjoy these pics from the pride parade this year… and click here to see all the pics uploaded by members or add your own below.

Want to know about those personalities you will meet out there or in your community? Those burners you are still trying to figure out. This handy guide to identifying burners courtesy of reddit.com/r/burningman (In other words I didn’t write this):

• The Acquisitor: Measures how much fun they’re having by how much stupid crap they can stuff their pockets with. Warning: the

y’ll try to steal some key piece of decor from your bar. Also, they’ll try to trade you a handful of painted bottle caps for a dose of E.

• The Bad Couple: Fights all the time. Fucks the rest of the time. One or both of them may try to seduce you; it’s not worth it.

• The Barfly: If you have a bar, this person will keep people coming back to it, night after night. Always willing to spell you at bartending, always there when you need a smoke, always drunk enough to find everyone fascinating, will dance to any music, laugh at any joke, applaud any story. Will probably sleep on the couch even if their tent is ten feet away. This person is your bar’s heartbeat.

• The Burnier-than-thou: similar to the Jaded Old-school Burner, except this is their third year. Don’t try to tell these people awesome stories of your adventures… They’ve seen it before, and anyway you did it wrong.

• The Camp Bitch: Would really have been happier staying at a nice hotel in Reno… but then they wouldn’t have lazy filthy campmates to complain about! They can’t believe what giant slobs everyone else is. Will moan incessantly about how no one else wants to wash the dishes. If you’re burning with more than two other people, you have at least one of these in your crew. If you don’t know who it is, maybe it’s you!

• The Center-camp Hanger-outer: Hangs out at Center camp the whole time. By the end of the week, they’ll have spent more money on iced-coffee drinks than you spent on gas. PRO TIP: Center camp is lame.

• The Creepy Date-rapist: Always has plenty of drugs.

• The Cruise Director: Has read the guide. Knows what day it is. Eats spectacular meals in a different place every night. Easily spotted by the addresses written on their arms. If you want to go to bed early, spend the day with this person; by sunset you’ll be exhausted.

• The First-timer Whose Mind is Completely Blown the Whole Fucking time: Depending on your point of view, these people can be deeply inspiring, or even more annoying than the Jaded Old-schoolers. Usually they take too many drugs and have at least one nervous breakdown.

• The Fish-to-water: It’s their first year, but they wear the playa like Jessica Rabbit wears an evening gown. Fearless, self-deprecating, and utterly charming. Makes even Jaded Old-schoolers smile. Make them your camp ambassador.

• The Font of Swag: Exact opposite of the Acquisitor. Each morning they’ll fill their bag with homemade junk, and won’t return to camp until they’ve “gifted” away all their garbage.

• The Jaded Old-school Burner: Never shuts up about how much BM sucks now… but still comes! You won’t see much of these guys, though, because they never leave their camp.

• The New Age Pussy Hound: Man of any age, but often 35+, sometimes with a eurotrash accent. Lures women into his orbit by several means, often involving a “punani trimming camp”, “shower camp” (ladies only of course) or other “Goddess-servicing” camp. Tells you you have an old soul. Likes to offer shoulder massage or g-spot massage to release your Inner Goddess.

• The Overly Spiritual Burner: Can be easily identified as the person who never laughs at your jokes. Thinks Burning Man should be like Easter mass: solemn and incomprehensible. Just drop them off at the temple while you hop a totally undignified art-car to the upside-down-on-a-pole-in-a-wet-t-shirt drinking contest at Pinky’s.

• The Overprepared Neighbor: Forgot your can opener? Your toenail clippers? Your corkscrew? Here you go! No, you can keep it; I brought twenty.

• The Person Who’s Having Way More Fun than They Seem to Be: Often the oldest person in their camp. Has had a hard life. You have trouble catching their name. You’ll worry because they just sit at the end of the bar the whole time, drinking from a flask. but when you catch their eye they give you a giant shit-eating grin.

• The Perv: All their clothing is shiny and/or crotchless. They brought a “bag of tricks.” For most of the week you don’t know where they are; that’s because they’re next door, having earth-shaking sex with your dumpy middle-aged neighbors. If this person invites you to a party they heard about, FOR GOD’S SAKE GO!

• The Philosopher: Prefers shots to cocktails. Often fails to notice hot nudity that’s right next to them. Has rough mornings. Loses their voice.

• The Raver: Wakes up at sunset. Measures fun in decibels. Runs out of drugs.

• The Seagull: That filthy kid stumbling around asking for water/food/drugs. Can also sometimes be discovered digging through your cooler if you leave it visible. Occasionally found passed out in your tent if your tent is near a road (true story – a campmate found one of these in his tent one year). Probably got into BRC via a “I Need a Miracle” sign and a gifted ticket.

• The Shell-breaker: who would have thought boring old Doug from work can sing like Barry White and do beer bongs like Bender?

• The Sparkle-pony: No camp is complete without some of these. Well costumed, and fun but offer not much in the way of usefulness as Sparkle Ponies. They hug, but don’t do dishes, nap during dome setup or offer sunscreen but not help tear down. They’re a bit like furniture you might get a chance to fuck.

• The Weekender: Arrives on Friday in an RV that’s more luxurious than your apartment. Doesn’t want to meet their neighbors. Doesn’t pack out their trash.

• The Wrecking Ball: Spills drinks, knocks over barstools, falls off of tables, rides their bike into support ropes and is humorously flung backwards, wanders off with the bong, invites thieves over, gets hurt, gets tickets. Can always lay their hands on a megaphone.

• The Yahoo: Says woo. Picks fights. Is a dick.

• Your Dream-girl/guy/both/other: Your perfect soul-mate. You’ll spend the most wonderful night of your life with this person. Then you’ll find out they’re married.