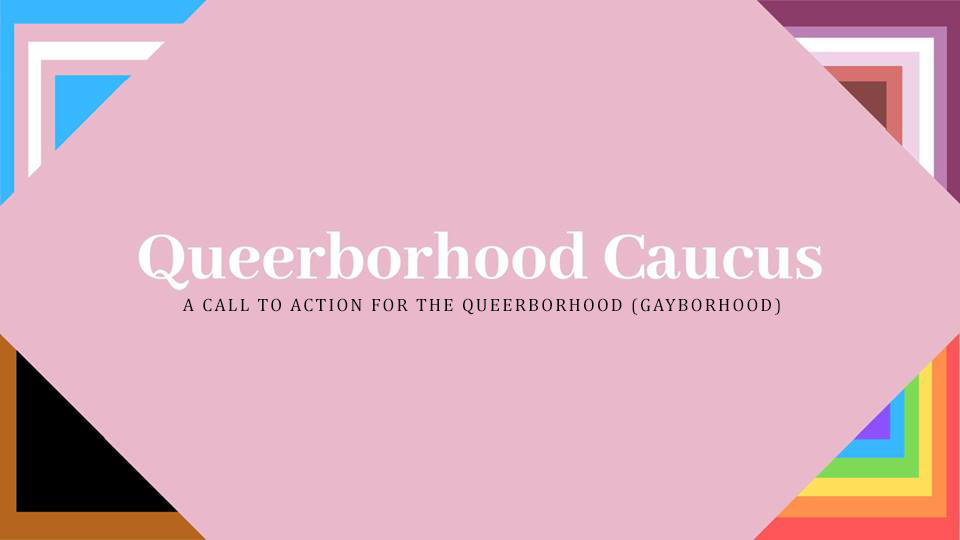 I am so excited to see that leaders in this community have taken up a torch for the benefit of the 7:30 sector for the Queerborhood (formerly the Gayborhood). Over the years Placement (a burning man office that oversees the way the city is populated by placing camps) has threatened to break up and separate the Gayborhood time and time again. It was originally something that came together because camps made it happen organically and out of a need (see link: refer to 1997 date).  In 2015 (link to details) we had our first Rainbow Road where queer camps were generally placed along “D” road between 7:00 and 8:30 under the influence of a staunch community ally in Placement named Hepkitten.

Former head of Placement Answergirl called us all in around May 2016 under the assumption that LGBTQ camps were the reason the sector received an unusually high amount of applications. Was this queer camps setting the scales off? I think in the end the real truth was that queer camps were bringing something very special to the sector and that ally camps and camps with some LGBTQ wanted to be part of that vibe.

The thing is, I have visited other sectors of Black Rock City, and each has it’s own special feel. Breaking the Gayborhood into 2 pieces will not solve the high number of applications for the 7:30 sector. 4:00 has it’s own energy. 2:00 and 10:00 as well as 9:00 have a flavor, culture and consciousness of its own.

New head of Placement is Trippi Longstalking who has seem to shown she is an advocate for the culture and creative energy we as LGBTQ people bring to the table. Us, along with ally camps, work hard to build something special out there. But even as late as Burning Man: iRobot 2018 we were still peppered through the sector in clumps and just like the map from 2016 showed (along with the notes Dare: Glamcocks made on a photo graphic of the official map). In the beginning of the 2018 season this year the Placement newsletter gave foreboding information about a sector shakeup that sent a wave of nervousness through the community given our extremely uncertain place in it.

We seem to be fighting for several things that some people have lost sight of: the right to radically represent LGBTQ culture in the most positive way possible. We are fighting to make sure that people represented in those letters are not further marginalized and taken advantage of  by assault, rape, gay bashing and trans-phobia. They happen out there today. They happen at Burning Man, Regional Events and IRL. Safety was the primary concern for people who were surveyed: Results 2016 P1 and Results 2016 P2 [Pending review]

Yet there are those dismissing voices who call for the Queerborhood to be dismantled and dismiss it with prejudice as the Gay Ghetto. They also claim that the Gayborhood keeps people locked in the bubble and others out. See the results of the on-playa Placement meeting with camps from 2016 where voices determined to squash queer camps showed up and hijacked the meeting for their own agenda.

Why do requests of LGBTQ camps to be placed closer together go unheeded even with all the information given to them? Not everyone is going to want to be in the cluster, but those asking for it should. Some would say they were already doing that, but smaller clusters. And why should they do that and not for anyone else? Well, they do for Kidsville but that was a whole other bag of bees. And do they think by spreading us out more this will resolve anything more for them or us?

It seems like Placement is evolving and we have yet to see how we are fitting into the discussion. The conversation in 2016 with Answergirl left more confusion that results especially for me when she said: “Imagine the Gayborhood [changes or goes away or something like that]…” and used the eraser to remove it from the whiteboard and then back peddle wildly to clarify.

It is time for Placement to acknowledge the Queerborhood as it has been present at Burning Man in one form or another for 15+ years. Answergirl told myself and Cyndi NoPants with a wave of her hand at the 2017 GLC that the Gayborhood does not exist so there is no reason to talk about it going away or not. Trippi Longstalking was in the room preparing to take over Placement quietly observing and I looked at her. I looked at Trippi who had the most interesting expression on her face because it said something to me I have yet to understand. Was it the hope that a new sheriff was in town or was she considering how she might have handled that discussion. I have yet to know. And this whole post is my own interpretation of the events.

I know we have allies in the BMorg. I know that BM fundamentals that have built the city do not want to group camps by specialty. No more red light district? Kidville is in tact. This year a lot of food driven camps were clustered closely. Musician camps like Rootpile camp have started consolidating. When Placement talks about the future what exactly are they getting to? And when will they acknowledge our progress?

See the following links for more information on this subject: