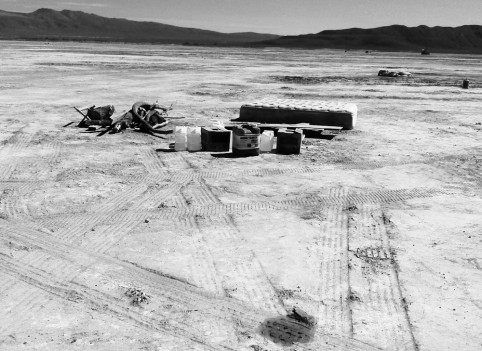 Burning Man calls out a camp on one of the first renditions of the MOOP Map published on their blog and it is spawning a lot of discussions that are very important for the future of Burning Man. Is Burning Man devolving into a Coachella? Oh, that there is still icing for that cake!

MOOP: Matter Out Of Place: LNT: Leave No Trace: 1 of the 10 Principles

It does not happen very often, especially in these later Burner years, when the Borg calls someone out for their ultimate fail. Gypsy Flower Camp run by John Moonshine (whose profile says he is from Gerlach but it looks like he was from San Francisco?) left behind one of the largest messes seen on the playa.

Not only with MOOP, but it seems there was some unseemly behavior by the camp coordinator for his bad

attempt to create a plug and play (pnp) style camp that fell way short of it’s promise to people who bought into the camp.

Failure of the plug and play scenario seemed to be the permission needed for people who ended up camping there to leave the trash and other items behind. Read the comments on the September 19th post from The Hun (a member of the Playa Restoration Team) because there were people who made sincere efforts to make up for the failure of camp leadership but there is a stink going on here that is not just trash.

Poo? Human Poo? In bags left to be picked up by other people? Yes… shocking as hell to think about it. We have used pee-bottles casually enough and a whole new level has been reached. 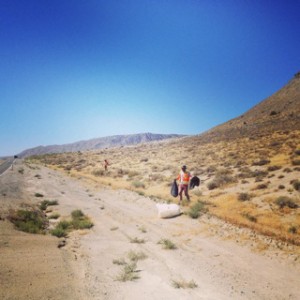 The article posted today sites trends of found items. They track these things in order to address them in future conversations: 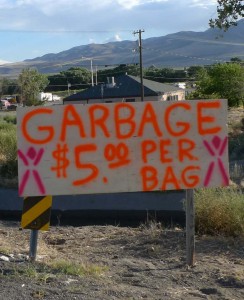 Leaving the Burn every year there was clearly abandoned bundles of garbage left all along 447 heading into Wadsworth, running through Gerlach, Empire, Nixon that made one’s stomach turn. In our minds we may chose to believe that these were accidental, but the deluge was shocking.

Highway cleanup reports picking up “24 pickup beds’ worth of roadside detritus”. While the blogs give out props to some people for making strong efforts the results of humans invading the desert are creating an impact that is disastrous.

“My truck alone picked up 64 contractor bags of trash, 30 tires, 20 yurt panels and a bunch of miscellaneous stuff,” Ninjalina says.

~ Leaving No Trace ~
The Burning Man community respects the environment. We are committed to leaving no physical trace of our activities wherever we gather. We clean up after ourselves and endeavor, whenever possible, to leave such places in a better state than when we found them.

Leave No Trace is one of the fundamentals that allow us access to the Black Rock Desert and if it were not for the playa restoration team our access would have been withdrawn a long time ago. Seems like in 2014 patience was running thin, at least according to the Sept 20th blog post by The Hun, when “Highway Cleanup began out of respect for local communities, who were tired of their environment being littered with Burner detritus” and with good reason.

The argument of PnP camps impact on the community is an argument for another post. The failures at Gypsy Flower Camp is not especially shocking in the scope of things though the September 19th blog post seems to imply it was the most shocking ever seen. Witnesses in the comments section share similar failings of other camps, but anyone who stayed late on the playa will tell you (including this author) that Leave No Trace and self responsibility is waning.

4 thoughts on “MOOP: the word of the week”