Sexuality and Burning Man… people outside of BM have often described BM as a place where people to get all fucked up and run around naked. Essentially, that wraps Burning Man up in a nice neat cloth for them. 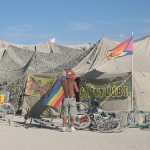 My arrival to Burning Man for my 2009 virgin year came with a warning from OhTony: “If you go to the playa expecting to get laid you will not”… of which I took to heart as well as working on eliminating any other expectation as noted in one of my recent blogs.

Sex, in a way, is another form of self expression. Some people express themselves badly, some awkwardly, and some rather indulgently. There are plenty of camps that will let you play out your fantasies even if it is something you (or your straight buddy) might only do during these 8 days. According to a Ranger I know he is surprised whom he sees enjoying themselves at the Downlow Club in the shadows.

People come to Burning Man playing out their fantasies and upon returning to the default world assume their Clark Kent identities. It can’t be all spandex and light wire, huh?

When you think of playa sexuality:

Sexuality is even taught! Camp Beaverton has a whole series of classes about varying sexuality and their own guru Dr. Reid (www.reidaboutsex.com) and others teaching the delights of strap-ons and other techniques. 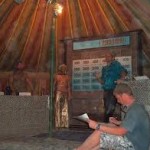 The hedonistic part of Burning Man is an extension of people expressing themselves and with this liberation comes other unbridled behaviors that occasionally come dripping with pheromones. But, do not let that be your motivation for coming to the playa, because the magic of this desert will smack your dick right into the dirt. OhTony said it best and it is advice well taken. Go to Burning Man for the experience and leave the expectations with your dirt angels.

Regarding our own camps, I heard a lot about “Jiffy Lube” [now called Stiffy Lube] and made that my first stop there late one night. It was a tent discreetly placed almost behind Comfort & Joy. Although I like a good play-time, the vibe and presence was dark and carnal in a way that was not my cup of tea. Yet, it looked like it could be a fun place for quick and discreet fun. Alas, I made the decision to go to Comfort & Joy for another flavor of entertainment.

Charming and energetic performers took the stage on one and of the large tent while they attracted an audience, the opposite site of this tent was lined with air-mattresses and on them people paying varying degrees of attention to the show. Between shows the action intensified. It was so comfortable in that camp and the entertainment varied enough where it was not all about sex, but almost a microcosm of the gay Burning Man experience unto itself.

It’s not all about indulgence, sex and drag performers…. no. Camp Stella is a dry and sober experience that I missed in 2009 but look forward to spending time at this year. Yes, I rolled my balls off last year, but I plan on coming a little more sober this year for my own reasons. Maybe Stella will be the people to share that with?

So, sex at Burning Man is plentiful and there is no reason to go looking for it because it will find you if it is meant to be. Breathe in the experience like playa dust and embrace anything that comes your way. There is more than sex out there, there is more than getting high, but even with all those things keep your mind and hearts open and participate in as much as you can.