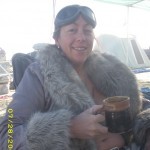 Jessica was one of the first women from Camp Beaverton to reach out to the Queer Burner community at large in an effort to make Camp Beaverton more accessible to any and all genders. She served as camp mayor a few years ago when the Queer Burners project was really getting it’s legs and was one of the community members who helped make it successful.

Around her time as mayor and following the camp began instituting a concierge program that spread through other camps that invited other people into the Beaverton camp.

While Beaverton was founded by a heterosexual white male it became synonymous with being a camp primarily of lesbians. But what some might not know, they provide education for people of all kinds. Jessica was one of the curators of this awesome educational series. 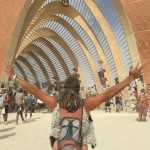 Living in Massachusetts she is one of the many that makes the big trek to Black Rock City and helps keep Camp Beaverton Home for Wayward Girls going. Her support for Queer Burner projects has also been greatly appreciated and among those who helped build bridges between their camp and the many others who love the Beavers so much throughout the community.