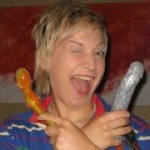 In previous visits to the playa many of my lucky fellow burners have had the pleasure of playa-romances. Some are famous and some are discreet, but for the lucky ones who have romance that extend beyond the Black Rock it’s a magic unlike any other.

Other people I know, myself included, have become so smitten with the idea of a burner-lover/best-friend/etceteras have found networks to extend the search into the Mundane World. Sites like Burning-Singles.Com as well as various networks on Tribe.Net wantonly draw in people seeking other burners to partner with.

The sometimes ambiguous sexuality of many burners can either leave the field wide open or reduce the field for the more picky seeker of love. 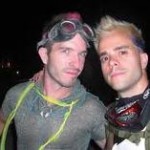 Is the idea of a Burner partner realistic or more along the lines of the elusive unicorn? Think about Burner men, of darn near any orientation, there is a fantasy life of glitter and fairy wings in their heads that is sometimes hard to attach to. Even when making their transition to the world outside of the Black Rock many do not easily re-attach. While others merge quickly and invisibly into landscape; are they still a desired partner if they assimilate well into the default world? 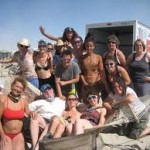 And Burner women? There is an uncommon strength and independence in a lot of women, noted by this author, at Burning Man. But there is a surprisingly high number of women who are self objectifying or responsive to male objectification; also noted by in a previous article from last year. Both these extremes play out and attract different potential partners for various reasons. However, the Burner female coming back to the default world seemingly exists between these realms of reality with more ease that their male counterparts.

These roles that unfold on playa versus the default world somehow even out on some levels, which is where burning-singles.com, Tribe.Net and ePlaya play out for the other 52 weeks of the year.

There are no statistics on the success of Burner relationships or one psychology defining the success or failure. However, in observation many Burner romances are sustained within the community. Yet, as the relationships age, it seems almost invariable that one partner will turn their back on Burning Man and move on. How they come to terms with it will also determine the survival of the relationship. 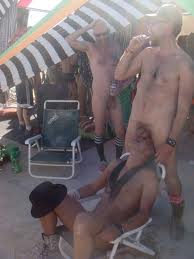 In a few cases, one partner decided they were completely done with Burning Man but allows and supports the other to continue that relationship on their own. It happens.

The issue of promiscuity and sexual exploration have been associated with the culture among other indulgences. What I am taken by are the way some couples have accepted reduced boundaries thinking that would create more freedom in the infrastructure of the relationship.

Lately I noted a lot of couples splitting up right before and after the most recent Burn. In many of these cases, the perception of having a flirtatious and open a relationship was presented to an interested party. When it was acted upon the result blew up in their faces. Seems like it is titillating to consider playing outside or within the relationship, but when it is acted upon without caution it ends up destroying the trust in the relationship.

One of the more famous camps at Burning Man deals with these issues head on in an educational series; Poly Paradise. They offer a great series of classes for couple or individuals exploring a Poly lifestyle.

Whatever the makeup of your relationships and the romance that ensues from it, being smart about advancing it is key. Burner men and women are often gregarious and experimental, but we are all programmed with ideals and expectations. Often people like us are open to exploring with those limits or tolerances. Men and women of this ilk can offer a lot, but stability? Before jumping into the unknown or opening a door to something that can unsettle what you already have get an education. Do not go into it blindly.

That minute of that the idea of going poly or experimenting with an alternative relationship might not really be the solution to the success of the partnership. Do some research.