Going on 27 years, the Burning Man spirit has evolved so much over the years and grew from something quite intimate to a space where one gets lost in a sea of nearly 70,000 people. Yet we 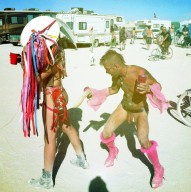 still manage to find one another and discover relationships /  friendships that maintenance on social media for 50 weeks a year but shine bright at our annual reunion. In the time we reconnect on the playa it is always fresh and like we were always there.

they represent. Many newbs tend to loose some perspective in their early years depending on their adaptation to the culture. We tend to forget there are gray areas around those lines.

Why do we do it? Well, it could be all those sexy people? It could be that kinetic creative force out there that is intoxicating. Is it the drugs? The booze? The hugs? naked people… or maybe a little bit of everything.

All we know that by Labor Day all of us come away from TTITD changed.

While we will soon have a whole section on queer-story on QB [dot] Com it is important to reflect on where it came from to where it is in the modern day. There are some great articles out there on the

origin of Burning Man on Baker Beach, San Francisco 27 years ago. What started out with 20 people is hovering around 70,000 people. According to Burning Man’s census now almost a full third of those people are LGBTQ++ (lots of blurry lines out there).

Not bad for an event started by three heterosexual white males brooding over a lost girlfriends and decided to burn a ‘wicker man’ in effigy to drown their woes. What does that have to do with us queers?

All the Radical this-and-that are something we homos have been doing since the edge of time. It naturally appeals to our basic instincts while hetero men are snicker over putting on their mom’s skirt, we are looking for the right accessories and eye makeup – hunty.

So when and how did so many queers get involved in this little shin-dig in the desert over all these years? While BMorg (Burning Man’s head quarters) has a lot of utopian ideals when it comes to

population all fitting together  like some kind of tapestry that tells a profitable story, the reality is that its not all puppies and unicorn farts. Homophobia does exist out there. There are dangers and that brings us to the Gayborhood.

The Gayborhood first evolved as queer camp started coalescing and it created an oasis that became a safety zone for LGBTQ++ members of the community. Safety and familiarity are the corner stones of the Gayborhood.

There are some famous moment in Burning Man history and some of those have been featured in various video produced over time.

Only the last three were specific to the Queer population. Although some things some people might want to forget they were important growing points in the community.

The LGBTQ++ part of Burning Man is growing but our impact is sometimes glossed over, but we still take a lot of pride in what our community brings to the event and the culture.