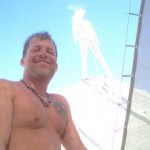 He was one of the earliest Queers to land on the playa and be queer. Not just weird queer but freak fag flag waving homo with other homos making an impact on this new thing called Burning Man in 1993. He was a part a of a new wave of people coming to the playa and making a bold new statement. That group would eventually start the first version of the Gayborhood when queer camps began networking.

Puck (Nathan) wrote an amazing piece recounting burner history from when a group of guys wandered out to the playa way back when and laid the foundation that would one day become Mudskippers Urban Decay Cafe and even AstroPups and more. And eventually Avalon Village that became the Gayborhood.