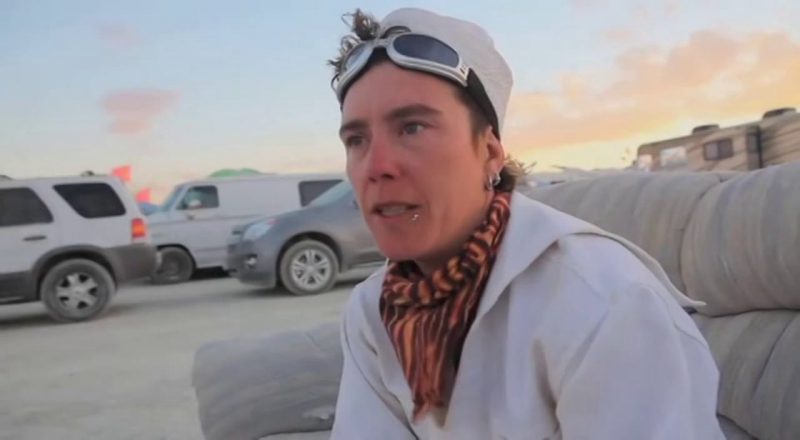 She was head Beaver from Camp Beaverton Home for Wayward Girls for a couple years. She was also the perfect ambassador that created a lot of bridges to other queer camps. She is an enigmatic member of our Queer Burner community: Foxy.

“Flash mob idea. Burners show up all at once in playafied gear goggles bandanas etc. Then a zombie flash mob shows up. The apocalypse starting right before the innocent bystanders eyes.“

Thinking back, certainly Jessica Allred was the mayor that really started working hard on making the Beaverton camp more accessible to the other camps, genders and people of the gayborhood outside of gender identified women. Mitch was Mayor for a while before Foxy took the mantel and really made the Beavers so accessible and welcoming.

Her unlimited energy and exuberance and willingness to play in other people’s sandbox has made her the darling Lesbian of the community. She is not limited in any form, because she welcomes people and engages with vigor any and all.

This year she has taken on a new title and something of a new journey by becoming a Ranger; that is a Black Rock City Ranger. It is a role of distinction in our community because these are the people we engage and help us in and outside the trash fence. We have seen how passionate she has become in her new role as a Ranger and how it has made her stronger and a better shaker in the community as a whole.

Foxy was one of the founding organizers of the 2015 Queer Burner Retreat called “Spring Retreat” and is planning on joining the production team for 2016.

In 2012 she was in a internationally distributed film called Meet the Beavers where she shared some of what she stands for in the Queer / Lesbian community. The making of the movie was a project she was very proud of, featuring the best parts of her collective, and putting the Beaverton crew as an even more important presence in the Gayborhood at Burning Man.

She loves pussy, in fact hers has a name: Augusta. It’s a kitty cat… with a lot of white fur. With four legs… not a euphemism.