Many community members were given a jolt with the news that BMorg’s Placement wanted to talk to LGBTQQ leaders about the state of the Gayborhood. Was it getting too big? Why are there 350 applications for the 7:30 sector and is it because they were from queer Camps? Is the high number of self identified queer attendees a correlation of these applications to the sector? 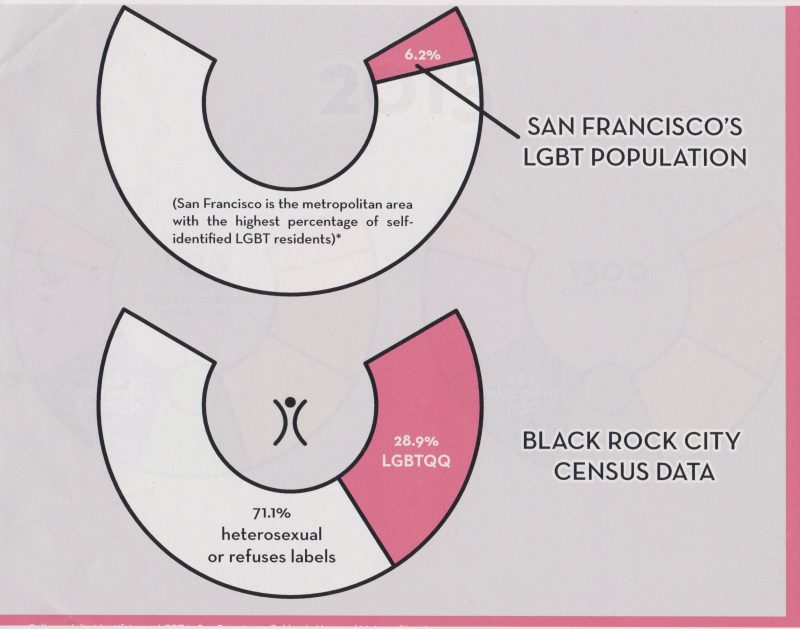 The above graphic came from the BMorg meeting showing that, according to BM Census almost 1/3rd of attendees identified as LGBTQQ (BMorgs choice of acronyms). Queer Burners has posted similar numbers on this before showing significant results of the impact of queer patrons on the Burning Man event but we have been marginalized in the culture every year.

A majority of our community have been marginalized in society and it was still prevalent in the Burning Man event except in the Gayborhood; which is not 100% true. Burning Man queers are predominantly gay, white males which to some are still vilified on some level for the same reasons as our straight, white part of society.

At the 2016 Queer Burner Retreat we were part of a well attended workshop about inclusivity and how simply respecting basic pronouns for people of various gender identification make a huge difference in the area of respect.

The popularity and attraction of the Gayborhood provides 1 outstanding feature for many people of all orientation and gender identity and that is Safety.

The 7:30 sector, in this burners 8 years, has been a zone with the best camps with the best attractions including but not limited to the Gayborhood. Camps like Orphan Endorphine, Party Naked Tiki Bar, AEZ, Playfully Yours, Suspended Animation and so many more have been based in that same zone.

The 3:00 zone tends to be a popular zone as well with camps known for making that space highly entertaining.

So the Gayborhood is just one part of the attraction that makes that sector so big and under demand. It is close to Center Camp. It is a hub of activity and entertainment especially at night.

So when members of the BMorg talk about a dream that one day all of Burning Man will be integrated and there is no need for a Gayborhood, I see this as fundamentally offensive. We are not always welcomed with open arms and we have been faced with threatening behavior by other burners. We have the numbers showing that. And many of us do not want to turned into processed cheese slices that fit nicely into someone’s bland world where we are all marching around in our gray suits.

Out of 302 respondents on a survey about personal safety in the gayborhood:

IMPORTANT: removed the white, gay male respondents and the numbers jump up to nearly 100%.

Based on our conversation with Placement this week we can anticipate the Rainbow Road layout of what we have been calling the Gayborhood. However, with changes coming in 2017, there is a chance the Gayborhood will be split into 2 sectors or Rainbow Road might be extended; although we want the community to be prepared for both possibilities.

To see the results of the recent survey follow the following links:

Footnote: “Gayborhood” is a term a lot of people are looking to see retired. Queerborhood has been thrown around but it is not a marketable phrase. Neither is “Gayburbs” (the 4:30 & J mini queer collective). As Placement releases the placement of camps that we consider a new brand; like Rainbow Road or something else that might better represent our community as a whole.

2 thoughts on “All in Placement’s hands now…”