The Burning Man Global Leadership Conference happened again this year and Toaster went representing QueerBurners.Com. There were a lot of other LGBTQ++ burners there working the event as well as participating.

The 9th Annual Global Leadership Conference runs Thursday, April 9th through Sunday, April 12th, 2015. Each day will be action-packed with incredible workshops, presentations, and fun gatherings. The 2015 Burning Man Global Leadership Conference will take place in the San Francisco Bay Area. The conference theme is “The Next Creative Renaissance: Buildin’ it up, Bustin’ it Out, and Bringin’ it Home” aimed at inspiring civic engagement through art and community. We want participants to return home full of ideas about how to make a meaningful impact in their hometowns, cities, and regions. Featured speakers and programming will address and explore activating and nurturing Burning Man culture and communities across the world.

There were queer burner leaders in attendance, but only one wore the badge that said “QueerBurners.Com” LGBT Burners; that was your very own Toaster.

This was a weekend full of amazing dialog and communication building for the “Carnival of Mirrors” event, but the scope of the Leadership Conference is developing community and the Burning Man ideology (brand, projects and identity protection). One thing is definitely sure, what Burning Man IS has changed. The up and coming leaders (in the community, not necessarily employees) have changed.

Burning Man is a business and the many limbs of Burning Man are wrapping around themselves building a stronger core by collapsing those ancillary entities into the whole. In recent months: the Black Rock Arts Foundation and Burners Without Borders are now internal elements of the Burning Man Project instead of satellites. Those employees are now Burning Man employees and they now have the resources that Burning Man has developed as well as the influence.

Politics and Wrangling Not Your Thing?

This ‘thing’ has grown and is still growing. Burning Man is not just Burning Man (in the desert) anymore. It is a corporation that works hard to maintain it’s identity. It seems to work hard from being too mega and from being marginalized.

Burning Man is in that wide field in-between all that. While this is all an opinion being shared here as a participant, it became clear to me that some of the ugly parts of Burning Man are being matured away from by a generation that does not accept the snark, sexually aggressive, community destructive ideas. But at the same time while the community as a whole is growing into new shoes the struggle to really maintain the 10 Principles every day has also been a struggle.

See the 10 Principles here… CLICK. One of the questions that came up was: What is Radical Inclusion … Really? Here are two scenarios:

Both these were discussed at the summit and in one case a unsolicited comment was made by one of the Gayborhood camps in a session of leaders. Most had never heard of the camp before, but as a member of the community behind this camp I was stunned and reeled.

There was a lot of talk about an eleventh principle. Seems like communities all over have developed something with the word “radical” put in front of it and found meaning with it. Among them, for a long while anyway, was the word Gratitude. 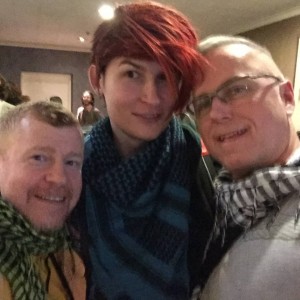 All those leaders who went to this event (400 of them) should be bringing these tools back to their communities. It should be a trickle down idea and it will hopefully see some people be inspired and step up to help make leadership better. To all Queer Burners… I give this site to you. I present this whole project to you. Only you can take the baton and raise the bar for the future and yourselves and your communities.