There were 2 highly visible incidents during burn week where people had a wide audience who complained they did not feel welcome in the queer neighborhood affectionately known now as Rainbow Road. This is not news to a lot of people, because we have had problems in the past, among LGBTQAI people exploring the area of Black Rock City.

Given the conversations we have had among leadership in the community, it is hard to believe that such a thing can still happen today. We strive to make Rainbow Road accessible to everyone.

A few years ago Camp Beaverton has a hard nut to crack. That is a women only space (women identified too) and there is a need to protect and honor that space. But the gay men-folk love their lesbians and thanks to the efforts of camp leadership starting with Bucket and then someone like Foxy and Galaxyled the way to make the Beavers more engaged and invigorated community partners.

The Beaverton space is still a space to be honored for women as Gender Blender is to gender queer and trans people which are all spaces that need to be respected. The GB’s have always maintained a sense of welcoming.

Nobody can deny how much The Glamcocks have worked to build into community awareness and to make sure that their camp was accessible by people of all shapes, sizes and ages. It’s been YEARS since there were any complaints and anyone holding into the past needs to explore the future.

That was the Past: The Now

Incident 1: As mentioned in a previous post, there was a meeting at Sun Guardians Village that was attended by a lot of Queer Burner Leaders, non-Queer specific and others. This was attended by Placement and Placers from Burning Man HQ. One of the attendees complained he was ostracized by queer Burning Man participants because he was an ex-porn star, ex-escort and so forth. In fact his position was so anti-Gayborhood and loudly spoken that it derailed the meeting with Placement for at least an hour.

This one person claimed that he posted on the Queer Burner boards and was treated horribly, though I have not been able to find that discussion. In fact the only thing I can find is an offer to help camps with grey water back in August this year.

This was a powerful situation, highly visible, from a person who has a voice in the Burning Man community at large and should never have had a negative experience, but things happen. We have some strong opinions and defenses out there but not to the point of exclusion. 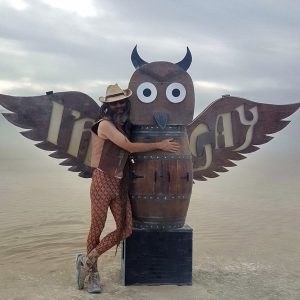 Incident 2: A Facebook Queer Burners user Matt Melnicki  posted his misgivings about they way he was received in the Rainbow Road camps. As someone in the process of coming out of the closet, plus putting out an art piece as part of his coming out process, I think from the discussion it was important for him to find that radical acceptance that even his own family hard a hard time giving him; a story we all know (depending on that generation you stem from).

This was his coming out piece, one which he was very proud of. As for some of the supporting posts on the Facebook feed he had a lot of admirers for his work.

“Hey, I’m the artist who did the little owl piece (near the library). I came “home” to some disconcerting messages from my mother urging me not to post about it on social media, and I don’t know how to respond to her (nor do I want to). She was initially supportive when I told her before I went into BRC last week. (The owl was a coming-out piece, for those who missed it). I don’t have the pictures yet to do my big FB post, but now I’m feeling a lot of the empowerment gained at BRC to be dissipating. (I also had several disappointing experiences of unwelcomeness at gay events/camps this year, but that’s another issue). Anyway, I feel alone and confused and sad again and I actually could use some advice if anyone wants to help me finish taking the biggest step of my life..“

There were a lot of other posts that went along with this and this is not even a good representation of the highlights. The problem is bigger than this because a lot of people have had similar experiences. I am also personally aware of some camps who have made tremendous efforts to improve accessibility of camps. I am aware of some camps who have done nothing, but the beauty is the people that have – have accomplished a lot.

Some of us walk into a space with our own baggage or prejudice and see people of a group in a certain light. The challenge in Radical Inclusion is a two way street which means to be received as an open heart, you have to go in with an open heart. To be accepted openly that person has to come in openly.

“Each of us has a biased world view because we are all limited to a single camera perspective. That is we can only see what comes before us, we can only hear what is around us, and we can only read that which is in front of us. No one has the definitive version of reality, including the the author of this lesson. Our social locations helps inform our world view – our race, class, gender, religion, sexual orientation, culture, etc.Our world view impacts how we view, respond, and react to every experience. Our job in this lesson is to learn what stereotypes and biases are, how to recognize our own biases…” – Recognizing & Understanding Stereotypes and Bias on cptc.edu

I have seen two very different reactions to the same kind of interaction in a camp like Glamcocks (or any camp) for example. It is no secret that the Glamcocks live up to their name filled with gorgeous men who are smart, witty and on the cutting edge of their respective communities. A middled aged man walks into camp and:

I have been on other sides of these equations. This is almost a personal testimony. Where is my heart in this interaction in the reality of the situation. What baggage am I bringing to the table? We all need to ask ourselves these questions and reflect.

In the last few years I have not seen a situation where a camp has not been welcoming. But then again I have a certain level of comfort and ownership that I bring into my interactions that are a lot different than where I was 8 or less years ago.

Without being in Matt’s shoes, or Rich’s shoes, we cannot speak for them. In no way can we blame these folks or apply fault for their perceptions. We can apply tools to help for the future. Or maybe provide tools for others. There is a lot of stuff online including a cool Huffington Post article.

In the end what we take into a situation is what we will experience. Smiles are contagious. An open heart is a road paved in gold.

The thing about our Burning Man world is that it is diverse in it’s psychology. We are all looking for something to hold on to. We want to hold on to each other but we have to be prepared for that union.