Very often an invitation goes to a person in the Burning Man Culture/Community to be a verified member on GayBurners.Com and post their activities or their schtik because it is of interest to this community in the opinion of the various admins. The reply is always: “…but I am not gay”.

Referring to one of the 10 principles and applying it to Black Rock City for 8 days a year, there really are few exclusions. An individuals sexual orientation is not on the surface most of the time. It can be assumed and ass-u-me-d is a bad word. When a “Gay Camp” or a “Gay Burner” web site or resource is set out for general consumption it really is not literally ‘exclusively gay’ as exclusion is not part of this culture.

“Gay” or “Lesbian” or “Trans” or more are labels. Resources like these help to bring together resources for people who live their lives with these identities. Sexual Orientation becomes passe.

“I had a wonderful time meeting and hanging out with my gay neighbors. They were all really nice guys and we got along really well. It was fun sharing burning man “war stories” with them. Jay and I were a straight guy island surrounded by a sea of homosexuality, and it was awesome. The major downside was that the area didn’t exactly attract many ladies, but then again, I was out playing and enjoying the art more often than not anyway! I think that it helped that there didn’t seem to be any Sparkle Ponies in the Dust Haven camp. Those guys have their act together!”  – Cromatest J. Pantsmaker R.C. Arizona

On the playa the “Down Low Club” has been touted as being a place where “straight” or “questioning” men can explore their sexuality. It goes without saying that a lot of self-identified “straight”-ish men explore life that cannot be executed in the default world. They explore cross dressing and making parodies of the women in their lives or fantasies. Sometimes it is purely the sexual exploration.

There are several camps where sexual exploration is all they do. And then there are camps like “Poly Paradise” that provide resources and information for partnerships that have a varied gender makeup.

As free and open those 8 days are, there are still men and women who are outwardly defensive with their sexual identities. ‘Homo-Phobia’ in whatever degree is still present.

There are camps that define themselves as gay or lesbian or gender blending. Most attendees know ‘Comfort & Joy’ as one of the largest gay camps on playa. The same thing with ‘Camp Beaverton’ and ‘Gender Blender’ for lesbians and trans. It seems to also be widely known there is open sexual behavior at 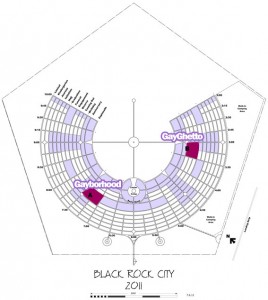 these camps on some degree, but they are also entertaining and educating and offering support for people looking for it.

The “Gayborhood” and the “Gay Ghetto” is where queer camps tend to collect. These are definitely non-exclusive and very welcoming.

Burning Man has some traditional events that really tend to blend people with no exclusions and on some level allows people to be vulnerable in their sexuality on some level. “Critical Tits”, “Critical Dicks” and “The Naked Pub Crawl” strip away the exterior with nudity but turn people into this tossed salad of self defined sexual orientation where that orientation becomes unimportant to enjoyment of the event itself.

Census results  for 2006 on BurningMan[dot]Com are the most current available. Since then attendance of the event has shifted in popularity and in 2011 (for example) the event sold out for the first time. In a recent article by Burgin attendee Oscar Remundo in the Huffington Post he stated that queers accounted for 1/3 of the attendance. Not sure how accurate that was but it feels like queer attendance is growing.

Afterburn Reports for 2007 are not available and 2008 only asks no specific gender and only if the person completing the survey are attracted to men or women. 2009 is not compiled according to the site.

It is hard to say without direct knowledge of how Burning Man sees the strong queer presence at the event. We are actively contributing to the culture and the event. We actively live the 10 principles. We have put blood, sweat and tears every year. ‘We’ is all encompassing.

At the Regional Leadership Conference in April 2011 the question was posed: “Do Queer Burners need their own regional representation?” For those who do not know, communities all over the world have a person(s) that represent Burning Man to them as a contact and they also watch out that the Brand is not being abused; they are called RC’s or Regional Contacts.  Some communities have 3 to 5 people representing them.

Do you think the Queer people of Burning Man need Regional Contact representation?

In a way we sorta have people looking out for Queers and the relationship with Burning Man. There are some great unofficial relationships that exist and active leadership working hard to represent. There are Queers working for Burning Man, but are they speaking for Queers?

Homo/Hetero life for 8 days a year generally blends nicely with Radical Inclusion. No gay camp is exclusively gay; there are bisexual, pansexuals, asexuals and more. In the default world we occasionally revive Burning Man in our Regions through Precompression and Decompression. For the most part the blend carries over.

When it comes to the Regional Contact list where is the representation there matching the demographic of Burning Man? It is a Hetero heavy list, while many have nothing against Queers, who is the voice of a community as large as ours.

Sexual orientation/proclivity is a big subject in Burning Man census data as there is a sexual part of this event.

There are strong relationships exist between Burners generally Hetero & Homo. There is a natural ebb and flow that draws similar people into similar groups. We have proven that individually we (all inclusive again) are mighty. Together we are unstoppable. Together we make Burning Man the community that is the envy of the world.

2 thoughts on “Homo/Hetro Genus of…”