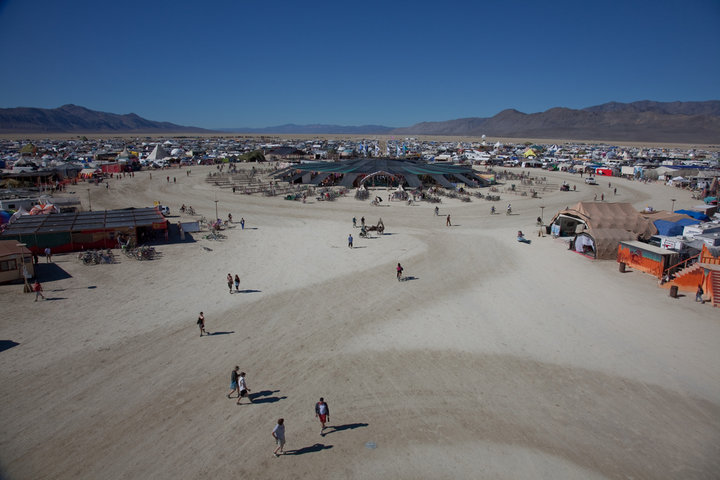 I am not the authority on camping at Burning Man. There is a whole survival guide available for the ‘how to’ and ‘how not’. This week I was talking to some people about their camping choices and it got me thinking about if any of our members were asking themselves the same questions.

Burning Man still has not released the official camp list, but they have changed the criteria for becoming a “theme camp”. The number of people as a minimum was greatly reduced so as many as 3 people can have a theme camp. The idea is to open the door to creativity and interactivity as much as possible.

Really some of the Queer Camps have done really well in this area and some of the new ones are looking pretty impressive. Everyone knows ‘Comfort and Joy‘; or at least you heard of them (see the Queer Camp page to get more details on these camps mentioned). They have things going on through most of the not the least of which are fully produced shows and the pink gym for those heavenly workouts.

The Camp Beaverton Home for Wayward Girls and their sister/brother camp Gender Blender have some great workshops you will find listed in the what where when.

These are just the big names while there is a whole bunch of camps with varying events to entertain and delight. BUT, what would make you camp with an established camp? Why? And why pay camp fees?

Well, you get the chance to be part of the machine that makes the camp work and your donated time along with your camp fee support the infrastructure of the camp. It’s like working for Disneyland and buying your own lunch at the cafeteria. Maybe you hate Disneyland and want to play alone on the Teacups???

One friend of mine on his first year had every opportunity dangled in front of him to become a part of any of a number of theme camps from the mega to the small and intimate. Yet, he chose to camp alone on something like J and 8:30… on the outer rim. He set up his camp and came home only when he was done playing. He went out to the quiet and sometimes neighborly outskirts.

I suppose that has been the complaint of some people camping much closer to the Esplanade, the lack of quiet. Rather the thump-thump-thump of roving art cars and sound camps. But I personally have spent my last two years just off the Esplanade and never had those problems. In 2009 I camped with Sin City Village on 7:30 and Esplanade. In 2010 I camped with Journeys at 5:30 and A.

That might be another alternative to Queer Camps is spending time with your region like I did.

Whatever choices you make for your burn do what you want to do. Here is some advice from other members for new and veteran burners that you too can participate in!

The City: “Rites of Passage”

Have you seen the new map of the city? 16 new streets this year! Sold out ticket sales!?!?! WTF? Check out these street names:

I may not know what a couple of them are, but I love them all!