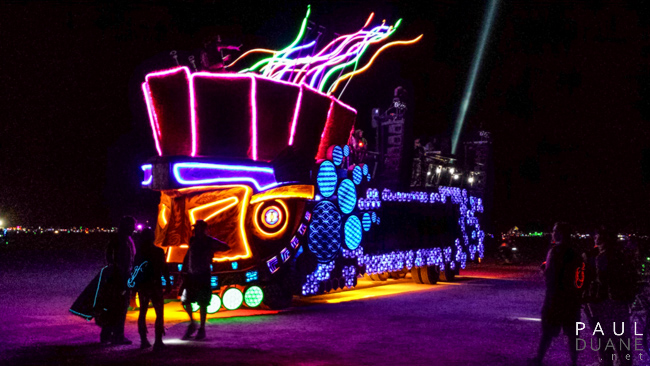 2014 came to the playa with a lot of ceremony as a late released theme for the year seemed to come with a forced luster and lack of promise in the shadow of 2013’s Cargo Cult. But that would be wrong. Caravansary delivered and the Souk was a shining ring of light around the biggest Man to date. 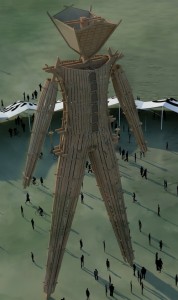 Here here to an organization that is taking it’s growing pains and making them work for them. While the popularity of Burning Man and it’s accessibility have definitely become more mainstream, it has driven a more diverse audience into the annual festival. The coffers of Burning Man must be ringing jingle bells.

While many burners see it simply as a drunken, naked drug fest in the desert the massive presence of Burning Man was nothing to scoff at. Embrace did not live up to it’s promise. The star on that desert floor was the souk and the man hands down.

On the other hand…

The returning burners who were picking up moop and scoffing at the pee bottles, beer cans and other oddities left in – on – around porta potties. Frat boys dropping beer cans in the street and the growing plug-n-play loosers on their Segway’s with 1000$ cape jackets and a distinct lack of personal lighting.

Nothing too new, but it cannot go without notation that the douche-baggery level was up. Yes, ladies and gentleman, Fonzie is on the water skis and the shark has been jumped indeed.

The event was produced really well and in spite of rain and huge delays at the gate the shifting demographic and newly minted “burners” has led to shorter exodus times and a chance to evolve. It was uniquely beautiful in spite of a few things and the love of the event was still present in so many eyes.

Art: so much beauty and imagination out there this year with very few out shining the Man. There seemed to be a lot of repeat pieces from previous years but another… another zoetrope … that was pretty cool looking.

Art Cars: Lots of beauties out there; new ones and some old favorites. Although in the Queer Burner mind a favorite of the playa is Crisco Disco, another star this year was an Mayan Warrior looking art car with a sound system that rivaled even Robot Heart.

Theme Camps: Once again Comfort & Joy was the crown jewel of the Gayborhood even though they had 100 feet less than what they wanted they managed to make it work. Adorned with the new Queer Temple the camp really raised the bar once again even though they have been doing this for something around 15 years.

7:30 Corridor: The location of the Gayborhood was piled fill of amazing camps and capped with a giant purple penis. This was the most alive passage in the city at all hours of the day and still a main attraction of the city that really never sleeps. The “Red Light Corridor” was apparently placed next to the Gayborhood starting with Playfully Yours. 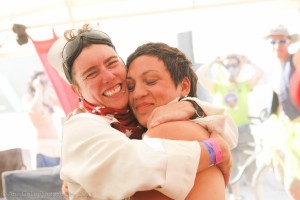 Gayborhood: One of the brightest centers of the city from Comfort & Joy, BloAsis, Beaverton and Gender Blender; a lot of old favorites. Wasabi Kisses, Sun Guardians and a few others were new kids in the block that put on a good show. Too many amazing camps to mention just take a look at the 2014 camp listing page.

Gay Pride Parade: Another change to the structure of the parade this year allowed participants to stop in queer and queer-friendly camps on the way to Burner Buddies. We started at Crisco Disco home camp inside Comfort & Joy then bounced over to BloAsis, then Party Naked Tiki Bar, Champagne Lounge and finished at all amazing Burner Buddies for everyone to get a chance to get their Gay Card!

Aerial footage of The Burn, Burning Man 2014 from Eric Cheng on Vimeo.