(This is a repost from the Gay Burners page on Facebook. It, according to Facebook, was seen by 261 people as of this x-post and almost no one made comments on the content of it.)

With all the fun stuff there is some serious things too. We take the good and the bad and we deal with it as a community. Never be afraid of offering critical feedback. And if you have suggestions please feel free to share them. Even when a subject makes a person feel uncomfortable it is still important to deal with them. If you have something to add then pARTticpate with immediacy and do it… this project Gay Burners / Queer Burners / Quire is a community driven series of projects.

This is Scott aka Toaster writing after the last 2 posts. Some members of the community have been critical about some of my postings in the past as having been too controversial. The phrase “…more flies with honey” has been thrown around a lot. Truth is I have struggled a lot with the comments made to me by Andie Grace in the main hall during the Burning Man Regioanal Conference that I attended for the 2nd year in a row in 2012. Now I see these posts about rape while on the other hand the Placement team did such an amazing job helping build the Gayborhood; and from that came the Gayburbs (see trip report on queerburners.com for details on that).I read the @Burners.Me article as soon as it came out and let it flow around in my head until I saw the Huffington Post’s article. Even then I held my tongue because I started to realize on Thursday night with a group of Burners that I am invested in this culture very differently than many of my fellow burners. I see us as being not unlike a congressional district desperately in need to a voice and I think I was trying to be that voice. I have, from the heart, taken on some ugly tasks in this culture where I believed strongly that the 10 Principles were being violated by people who were charged to enforce them. I also took on a Burning Man representative and his partner who were actively attacking specifically female members of the community and ended up landing on my face. I have taken on battles against some great people in this community in leadership positions with a hell of a lot more influence than I and have been knocked down again and again. 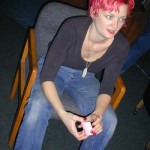 When I stood up at the Leadership Conference for Burning Man Regionals and spoke out I realized I just took another grenade thrown by the Regional Network; specifically Andie Grace. I was at the front of another losing battle when I talked about the concerns that were addressed at the Queer Burner Leadership Summit 2 weeks before.

When I asked for other representatives from the Queer Burner community to come with me to the Regional Leadership Conference the Regional Office said “no”. I was fortunate to attend, but this office in particular ( that includes Megs, Andie Grace [formerly] and Marian Goodell [one of the 6 owners of Burning Man, Director of Communications, and Board Member of the Burning Man Project]) has been highly resistant to giving us an official voice even though we make up a huge part of their census.There is a flaw in my argument though! When I say we should have a Regional Contact (or 2 or 3) for LGBT people I am not unaware that Radical Inclusion is not part of our community. My home community, the regional community I was once a part of before moving to San Francisco was Las Vegas and they were so loving and inclusive generally speaking. There was no need, in my opinion, for a separate Regional Contact in my mind back then.Yet, as I became more involved in the landscape of this culture and invested myself to an “all-in” position I see where this is actually important. We are a community in a community. When I asked the Regional Network team about this I was dismissed. I was told the BDSM community asked for their own regional, too, where would it stop? Again, the LGBT community was dismissed as if we were part of some chosen quirky lifestyle making unreasonable demands. Yet, 2nd Life (a computer game) has its own freaking regional?There are Regional Contacts out there who have done NOTHING for the community in years but still hold on to this title for their free ticket to Burning Man each year (a reward for all their work). We do have queer Regional Contacts and I met a lot of them this year; but who are they representing? Yes, they have a voice for Queer subjects but who is watching out for the LGBT part of burning man. Imagine when Jiffy Lube was being told they had to relocate (way back when) if there was a buffer between them and Larry Harvey… have you seen the videos?Note to beat a dead horse, but there are some serious disconnects at BMorg and I am personally trying very hard to make this project be a positive representation of what we are bring to the playa and the default world every day. My personal investment is a little OCD compared to others I see around me. At our San Francisco meet & greet Thursday night I looked around at the people around me. I saw in them a deep commitment to this life. I saw how different it was from mine; NOT THAT MINE IS BETTER! I am saying mine is a little too much sometimes. The issues I bare might not be mine to carry, but I try to do it to make things better for us all and better networked so we queers can help each other with our projects and other functions inside and outside the trash fence. So with respect and love I invite critical feedback. Don’t shove daisies up my ass and pretend everything is lovely… some have. We need to be able to talk about things and your involvement at the next Queer Burner Leadership Summit in the beginning of 2013 will be invaluable.